How can we help?

Dabney S. Lancaster Community College has announced the hiring of two coaches for its brand new men's and women's basketball teams, with the season to begin in late fall of 2019.

This is the first time in many years that DSLCC has offered both men's and women's athletics. DSLCC joined the National Junior College Athletic Association in August, 2018.

“We are pleased that Coach Garrett and Coach Wolfe have accepted the coaching positions for our inaugural season. I have great confidence in their ability to mentor our student athletes," said DSLCC President John Rainone. “Athletics will provide an increased opportunity for local men and women to continue their educationand enhance campus life and community involvement. I'm excited by the possibilities in front of us."

Recruiting for both teams will begin soon. DSLCC is in the process of scheduling games with other two-year colleges and possibly junior varsity teams from regional four-year colleges and universities. The team mascot is the Roadrunner, and home games will be played in the DSLCC Armory on the Clifton Forge campus.

Garrett, 41, is a native of Buena Vista, where he still resides with his family. He is a 1995 graduate of Parry McCluer High School, where he played for legendary coach Nelson Fox. He spent a post-graduate year at Camden (SC) Military Academy and earned his Bachelor's Degree in Social Studies from Ferrum College, where he was a member of the basketball team, and a Master's Degree in Education from Fort Hayes State University in Kansas.

Garrett is currently serving as the assistant principal at Nelson County Middle School in Lovingston, a position he's held for the last four years.

He has many years of coaching basketball under his belt. “I've coached at just about every level – high school, jayvee, and college," he says. “I coached the Southern Virginia University (in Buena Vista) basketball team as an assistant on two different occasions."

“My biggest accomplishment was being the head coach for the Nelson County High School boys' basketball team – we won the State Single A Championship for the 2007-2008 season," he notes proudly. "I've been lucky to be surrounded with great assistant coaches and special players throughout my coaching career."

He took a break from coaching a couple of years ago, but says he's itching to get back into it. “It's in my blood," he says.

“My goal, at least for the first couple of years for the Dabney program, is to get it established, to build a foundation," he says.

Garrett hopes to begin recruiting players soon. He may be reached at bgarrett@dslcc.edu. 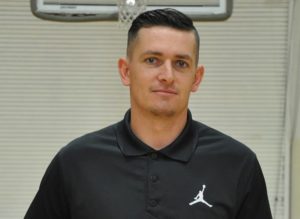 He briefly attended Liberty University as a walk-on player for the football team, and while a student at DSLCC, played basketball on a club team under Coach B.B. Bryant. He says he enjoys working with teenagers and young people in general, and he loves the intensity of sports, basketball in particular.

“I've had some good success at CHS," he says. “I figured this would be the logical next step for me."

While coaching at CHS, Wolfe's basketball teams have been district champions, with multiple trips to regional championships and a state appearance as well. He's coached eight individual state champions in sprints and jumps, and a state runner-up as a team. He's already started scouting some area high school teams, as well as AAU teams.

Wolfe, whose nickname comes from his father, (the younger Wolfe, who is 6 feet tall, is called Little Shorty when the two are together), works full time as a lead foreman for his family business, C.T. Wolfe Construction. He and his wife, Carolynn, have three daughters: Kendall, 12; Alexis, 9; and Aubree, 5. He may be reached via email at Cwolfe@dslcc.edu or by phone at (540) 620-6825.

Support for athletics will come solely from private donations and various fundraisers throughout the year, Dr. Rainone remarked. For anyone interested in supporting DSLCC athletic programs through a donation, please contact Rachael Thompson at rthompson@dslcc.edu or by phone at 540-863-2837; sponsor packages are available.

A schedule for both teams should be announced in the near future.